I have been working with wood logs, branches, and twigs for the past four years. The metaphor of branches is appropriate for the idea of personal decision-making, choosing one way or another at a “branch”. Branches create a visual image of reaching out and connecting. There is an immediacy about branches and twigs that recalls the woods and our connection to it.

Trees, especially when planted apart but visually close, act as metaphor for both individual isolation and the potential for connection and community. By using branches and other materials to connect existing trees, this project focuses on the potential for connection already present in the park and in the surrounding community. The curved area of solitary trees became part of a visually connected community during the process of the project. Community events took place there, people met and spent time together, playing music, reading, talking, singing, juggling, even dancing. 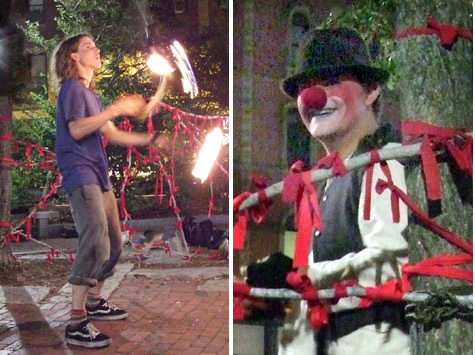 This project was my own personal interpretation of traditions which have inspired me. It was not a literal interpretation of these traditions, nor was it intended to follow rules of any religion. These inspiring traditions, as understood by me, include the following:
Yom Kippur: The Day of Atonement, on this day one asks to be judged in terms of how well one has worked toward reconciliation and healing of one’s relationships with people and with the Creator. If one has made a genuine effort at these things, then one is seen to have atoned for one’s transgressions, and one can then ask for forgiveness for what has not been done well or has not yet been accomplished. One can then begin the new year with fresh perspective. The holiday begins at sundown on September 21 in 2007.

There is a Jewish tradition of writing prayers on small pieces of paper and placing them in cracks in the ancient remnants of a sacred wall of The Second Temple in Jerusalem.

I was born in China, and visited there three years ago. I was visually inspired by a Chinese tradition at Buddhist Temples of hanging strips of red cloth at holy places (on trees and statues) to mark prayers, hopes, and gratitude.