I am a contemporary artist concerned with celebration and healing. I am deeply influenced by two key instructions for life, which are communicated to every Jewish child: “pursue justice” and “repair the world”. My work uses tradition to connect people and inspire activism. As a community builder and artist-in-residence I enjoy working in close collaboration with organizations, community members, students, and other artists. Most of the materials I use are locally resourced and renewable or re-purposed.

Awarded 2021-2022 One of Six Working Artist Grants from American Guild of Judaic Artists.

Engine commissioned video interviews with the artists; available for viewing here………As an additional note: My mother went to fashion design school in her native Vienna for one year before the Holocaust swept Europe. Years later in New York she became a women’s clothing designer for a mass production manufacturer with factories in Alabama and Mississippi. In Alabama we became good friends with one of the production workers and her daughter. We saw first hand the inequities and exploitation by that industry which continues today, often in other countries. We also felt the proud community of dedicated workers. Engine’s show acknowledges all aspects of this legacy. My deep thanks to Curator, Kaitlin Thibeaut and Videographer, Jesse Galkowski.

Asherah was awarded a 2019 Alumni Artist Residency, for the month of July, at the Maine College of Art in Portland, Maine, where she continued her exploration of materials, like wood and fiber, and of the topics of War and Genocide in art.

Dwelling Place Update: graced the lobby of the Maine State Museum. The selection of this piece recognized the role the original installation has played in Portland Jewish life over 7 years. It was redesigned and installed for one month in the Fall of 2018 as an introduction to the museum’s first ever exhibition on the history of Jews in Maine.

“Dwelling Place” solo outdoor installation September 24 through October 15 2017 at the Jewish Community Alliance (JCA) new building, 1342 Congress Street, Portland. This temporary installation is now in its 7th year. It has been shown and utilized for public interaction at museums and campuses throughout The Greater Portland area.

A special event for students from all College and University campuses in the area was held in the structure, in celebration of the Jewish Tradition of Sukkot, which is about immigration, refugees, and looking for a home, while surviving the elements outdoors. Traditional music and food.

Marc Epstein, award winning author and professor of religion and culture at Vassar College, has said of this show “Cinnamon accomplishes simultaneously in her current show at the Maine Jewish Museum what some artists dream of doing for lifetimes and never accomplish.. in creating her powerful, poetic, and moving pieces, Cinnamon is able to give back to the earth-melding the intensity of nature in all its wildness and unpredictability with the nurture of an ancient tradition, some six thousand years of story-telling.. She is a storyteller through ritual, and a ritualist through the telling of stories.” For expanded review, click here. 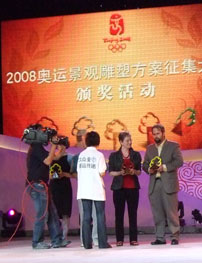 “We were honored to meet and receive our award from survivors of the May12 Earthquake, whose determination and heroism were graphically acknowledged during the Ceremonies. I am also humbled and pleased to have had this opportunity to get to know wonderful and talented sculptors from all over the world. This competition is a model of peaceful international dialog in the true spirit of the Olympics.”