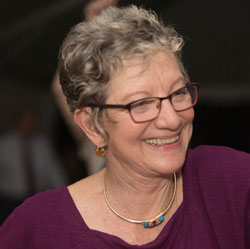 Asherah Cinnamon came to the USA as a child, growing up in New York and Alabama. Cinnamon says she owns land, which gives her a home and studio in the woods of Maine, and a source of inspiration, and materials for her work. Her studio is built on (and she is acutely aware that she benefits from) the original genocide and continued oppression of Native Peoples. The child of two immigrant refugees from the Nazi Holocaust,
survivors of the “Shanghai Ghetto”, Cinnamon is always aware that she does not live where either her parents or her grandparents grew up. In the 1970’s she arrived in the Maine woods, which quickly became the most deeply felt home she has ever known, perhaps, she says, in part because her ancestors had to flee their beloved rivers, trees, and snow of the heavily forested lands of Northeastern European.

Raised a feminist, with secular, yet very Jewish, cultural values: Justice, Integrity, and Community, Cinnamon’s work is increasingly drawn from the stories and rituals of this rich 6,000 year old culture. She is active in the Jewish Community of Southern Maine, which is her home in one way, but she lives in a small Maine town, where she is almost always the only Jew in the room….and she says, “I really do love my neighbors (even when we do not agree politically) and am a proud rural Mainer too”.

Cinnamon became in her own mind an artist in 2004, after her first year at Maine College of Art. Her Award winning pre-artist work, doing emotional healing, coalition building, and anti-discrimination training, is infused through her creative work as interactive public art, and social sculpture. Healing human conflict and ending war and genocide are recurring issues. She enjoys engaging people in thinking about why we wait two generations to become allies with our former “hated” enemies? “How”, she asks, “can art deepen our capacity as human beings for forgiveness, respect, and compassion, for each other and the earth?”.

A brief resume can be downloaded as a pdf file.